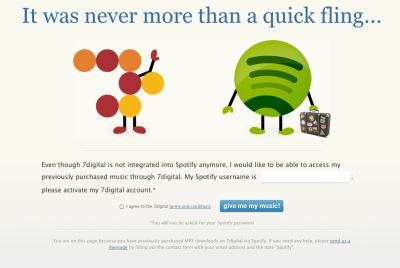 So here we go, after a partnership of a few years to provide Spotify with a purchase service they decided to go with their own service.

This was an interesting project as it was completely separate from the usual team workflow and with no determined set of owners/champions.

It was suppose to be fast but it felt more lost and without direction than the other projects. It did remind me a lot of the time before the teams adopted product managers, leads and kaban (and other things). There was a lot of pulling around from different people interested in the project from Support to Marketing to Development and random timelines and feature ideas were decided.

Being almost a one person development team was a difficult task, I had to single handily do the development, set targets and review them with the other areas.

In retrospective there are things that showed up that were quite useful:

#### What could have been done better:

As a side note I felt like I let my team down by dissapearing for several days and doing a parallel work flow - although the days were noted as work and I was marked in the team kaban wall bringing our day to day methodology to this would not have delayed it but actually make it faster.